The zone of alienation of the Chernobyl nuclear power plant is fraught with many mysteries, most of which are hidden from prying eyes in the destroyed premises of the station itself. One of such mysteries, which the researchers and liquidators of the consequences of the explosion tried to solve for a long time, was a certain substance called “Elephant’s Foot“. 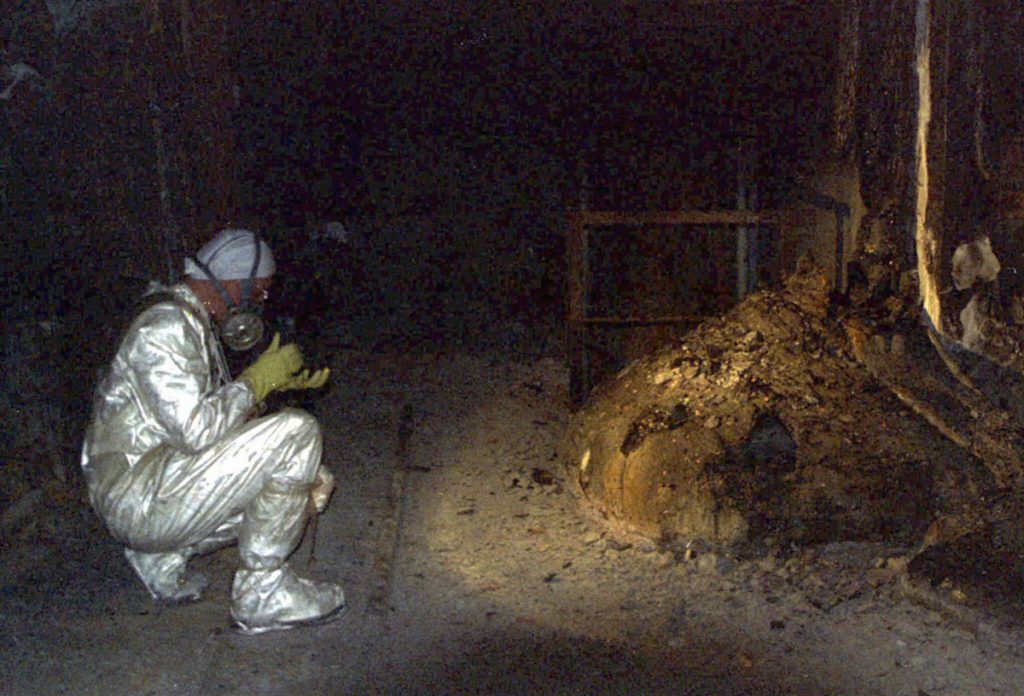 “elephant leg” – MOS01:CIS-UKRAINE:CHERNOBYL,UKRAINE,17APR96 – A worker at the Chernobyl nuclear power plant takes a reading of radioactivity April 17, inside the ‘tomb’ encasing the ruined fourth reactor which exploded and caught fire in the world’sworst nuclear accident 10 years ago. Readings here are 800 roentgens per minute,one-tenth of what they were by the ‘elephant’s foot’ – the tangled mass at right of nuclear fuel concrete and steel which melted in the accident. POOR QUALITY FROM SOURCE rp/me/Stringer REUTERS

Elephant’s Foot is the accumulation of fuel masses with high radiation. “Elephant’s Foot” originated during the Chernobyl accident on April 26, 1986

The largest nuclear hazard was the remains of the core in the reactor shaft and fuel congestion in the lower floors. It was necessary to bring diagnostic devices as close to them as possible, and, if necessary, to introduce neutron absorbers into the fuel. Therefore, it was decided to clean and deactivate the premises on the western side of the Sarcophagus, install drilling machines in them and through the concrete walls, sand and gravel mixture and the water protection tank to drill the wells both into the reactor shaft and into the reactor rooms. This would allow us to inspect the previously inaccessible rooms with the help of periscopes and television cameras, determine the degree of their destruction and the place of fuel accumulation, and then bring detectors of neutrons, g-radiation or heat monitoring devices to them.

As the penetration to the epicenter of the accident, the true state of the destroyed reactor was clarified. Model representations, used in 1986- 1987, in many respects were not confirmed.

It turned out that only a small part of the core fragments remained in the reactor shaft, and the upper cover of the reactor weighing more than 2000 tons is inclined at an angle of 15 ° to the vertical and rests on one side on the edge of the metal tank, on the other, on the reinforced concrete slab lying on it. A number of detached process pipes hang from the cover. The lower lid fell 4 m after the explosion, crushing the massive cross-shaped metal structure in the under-reactor room, and about a quarter of it completely destroyed.

At the base of the reactor, a blockage was found out of graphite blocks, structural elements and “fresh” concrete, which flooded and under-reactor room, where a significant part of the fuel got to. Having melted sand, serpentinite, concrete and other materials, the fuel formed streams (including Elephant’s foot) resembling lava, which through steam valves and pipes, cable channels and other openings penetrated the steam distribution corridor, bubbler pool, other corridors and rooms in bottom of the block. “Lava” froze in the form of many stalagmites and influxes (the influx with the greatest activity was called “elephant leg”). The chemical composition of the lava varies greatly, but it invariably contains up to 20% UO2 in the form of particles ranging in size from one to hundreds of microns.

In 1987, lava was very strong, and small pieces of small arms were used to split pieces of the elephant’s leg

In 1987, lava was very strong, and small pieces of small arms were used to split pieces of the Elephant’s Foot. Now it has lost its hardness, glassy luster and is gradually being destroyed, turning into fuel dust – a modification of the fuel, representing the greatest radiation hazard.

If the amount of finely dispersed fuel in the discharge is estimated at 6-8 tons, the mass of fuel dust inside the Sarcophagus is much larger. In many rooms it is embedded in walls and ceiling, covers the floor, hangs in the air. When they began drilling wells, trying to penetrate the 4th block, it became one of the main obstacles. The physico-chemical properties of fuel dust (“hot fuel particles”) have already been sufficiently studied. In Sarcophagus and the near zone of the Chernobyl nuclear power plant, basically two types are observed: large (tens of microns), consisting of one or several grains of UO2, at the boundaries of which fuel pellets were destroyed during the explosion, and small (several microns) formed during graphite combustion, fuel oxidation and its interaction with surrounding materials.

Inside the Chernobyl nuclear power plant is a deadly urbex: