The world-famous accident at the Chernobyl nuclear power plant has caused great damage to our land, polluting huge territories of Ukraine, Belarus and Russia for hundreds, even thousands of years. During the liquidation of the consequences of the disaster, a variety of machines were used. With the help of machines, such types of work were done where the person was dangerously located. But even cars in Chernobyl often did not stand up to powerful doses of radiation and just broke down. Machines in Chernobyl:

After using the equipment in difficult radioactive conditions, it was sent to special washers. Contaminated cars washed, cleaned, dismantled. Those that succumbed to processing, again went to the fulfillment of liquidation tasks. If the technique remained infected, it was either disposed of on specials. burial grounds, or put on “settlers”, which in the Chernobyl exclusion zone there are two (“Rassokha” and “Buryakivka“). 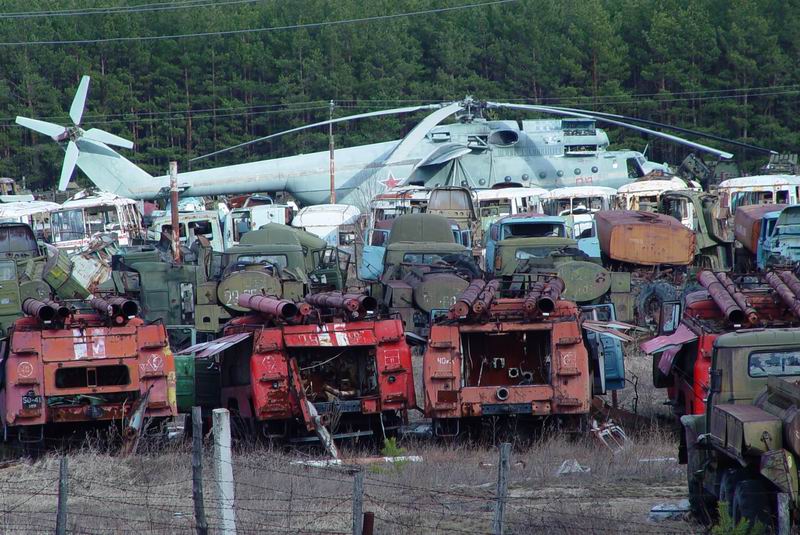 Rassokha – sedimentation tank of abandoned and radioactive cars in Chernobyl

Among the Chernobyl abandoned vehicles  stored in Rassokha, there were 10 Mi-8 and Mi-6 helicopters, engineering defensive machines, armored recovery vehicles, floating tracked vehicles, wheeled armored personnel carriers, chemical reconnaissance vehicles, cars and other equipment. According to some estimates, the total value of the machines stored in Rassokh, Chernobyl, in 1986 prices was about 46 million US dollars. The area of ​​the burial ground in Rassokha is about 20 hectares. At the time of 2013 sump “Rassokha” liquidated. There now you can find only buses and piles of metal. 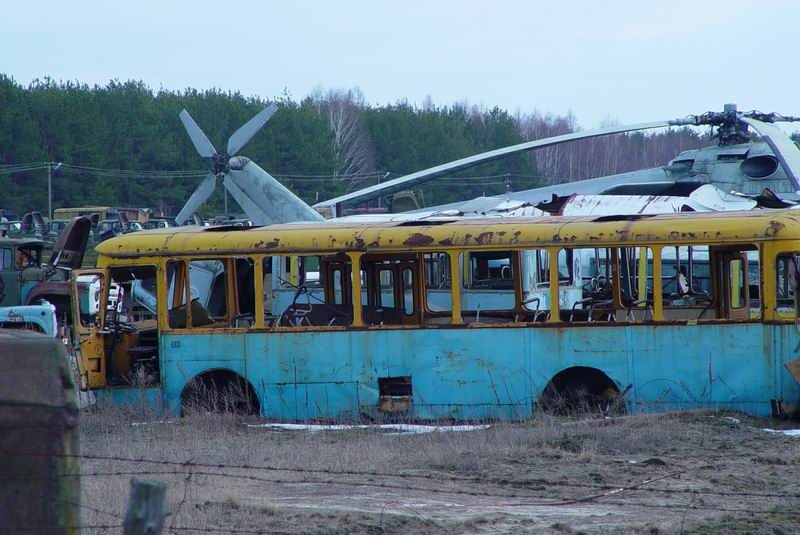 See the video, which technique was left in Chernobyl, and what level of radiation is on it: 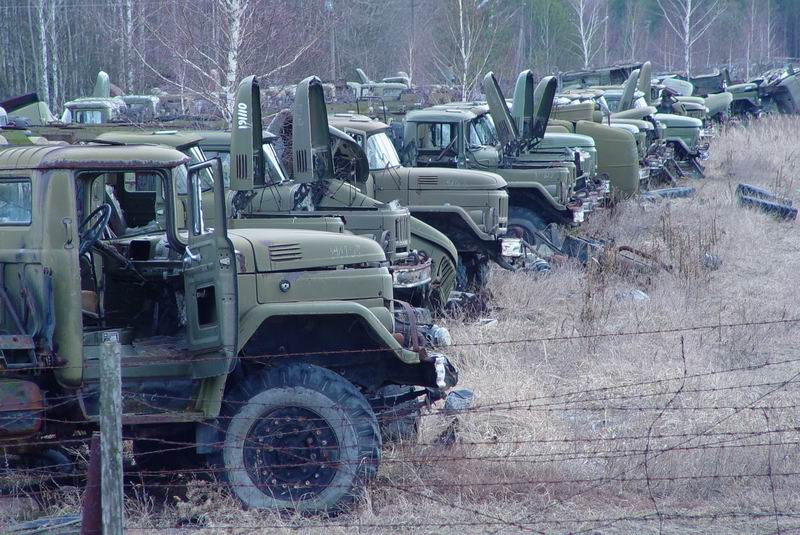 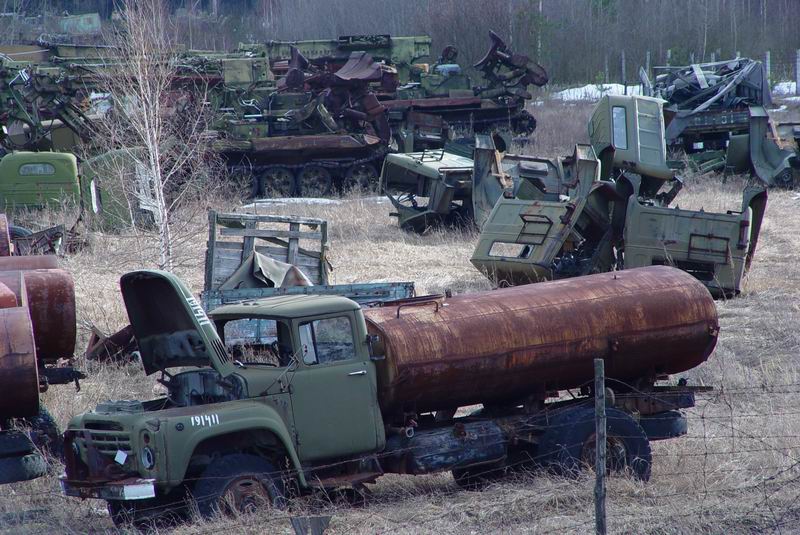 Chernobyl vehicle graveyard coordinates: there is a cemetery of radiation-contaminated vehicles on the southern border of the Chernobyl Exclusion Zone, near the village of Rassokha

In Chernobyl, there is a significant amount of abandoned and radioactive equipment that was used during the liquidation of the consequences of the Chernobyl nuclear power plant accident. The main part of the technology has already been buried in the cemeteries. Today we look at the radioactive vehicle of Chernobyl in 1995: 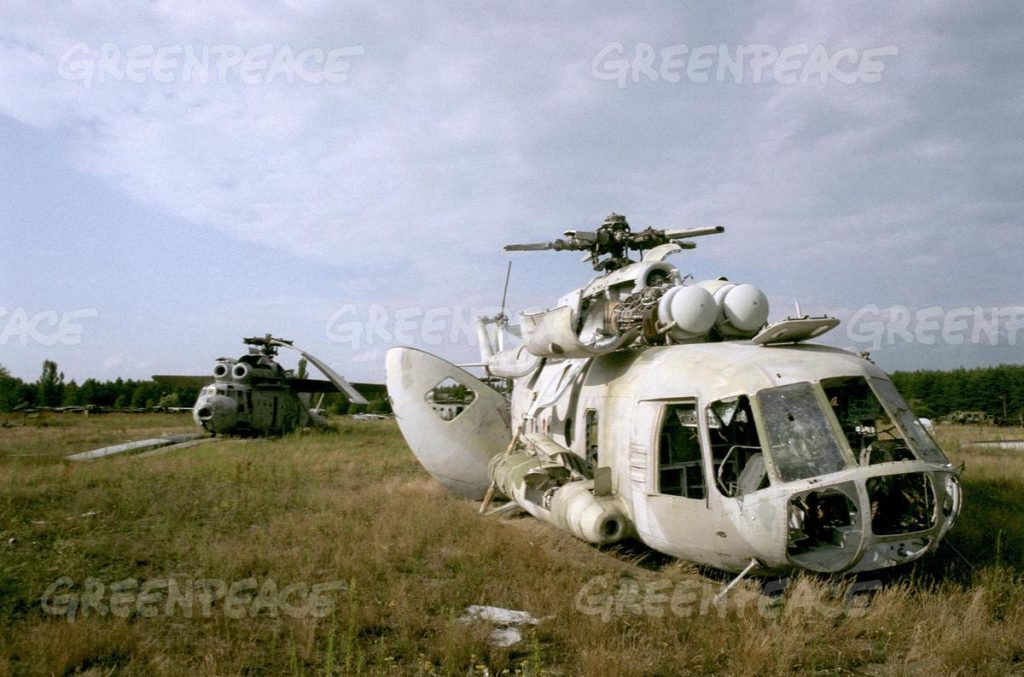 Chernobyl abandoned vehicles 1995-2005 was sent to the clarifiers

Sedimentation of radioactive vehicles was used during the liquidation of the consequences of the Chernobyl nuclear power plant accident, is located near the village of the same name in the Zone – Rassokha. The technique of medium pollution after the point of special treatment (car wash) was sent to the sludge in “Rassokhu” where it was partially preserved to our days, unfortunately in the form of scrap metal.

In Chernobyl, there are two such places – Rassokha and Buryakivka. At the moment, only Buryakovka has preserved more or less whole copies of the equipment used at that time, but it is much harder to get there than in its time was at Rassokh. 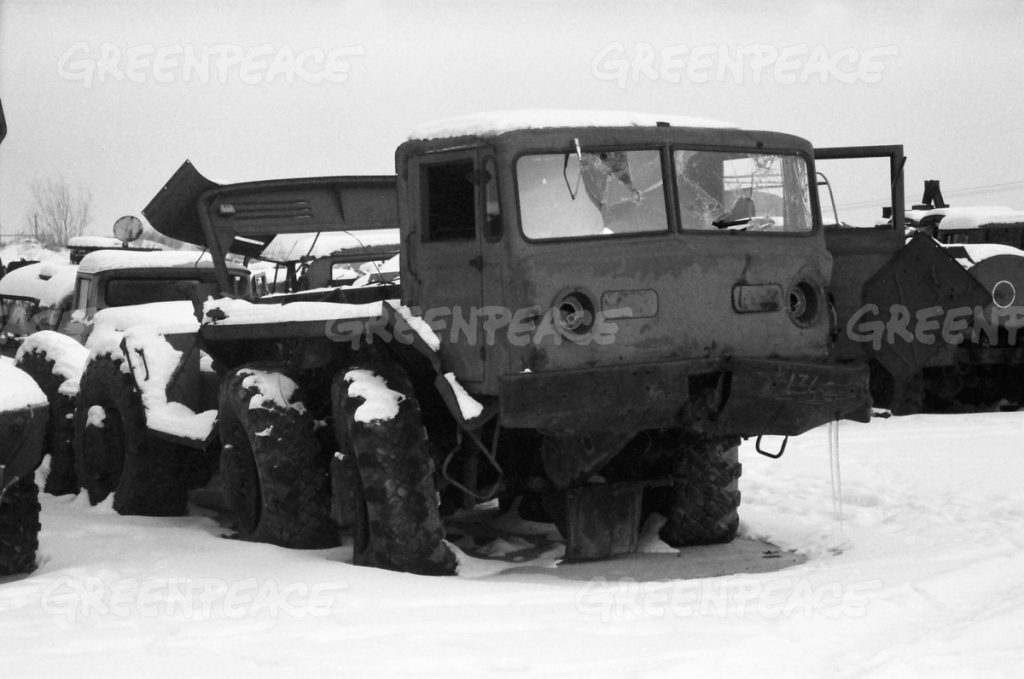 Where did the radioactive vehicles from Chernobyl go?

Rassokha was of great interest to stalkers – there were helicopters that took part in the elimination of the consequences of the accident, as well as a huge number of armored vehicles, buses, cars, trucks, special military vehicles and even motorcycles. But at the end of 2012 Rassokha was officially liquidated. Remains of equipment were moved to the plant “Vector” for further disposal and disposal. Some of the metal was plundered by residents of nearby settlements to the zone. 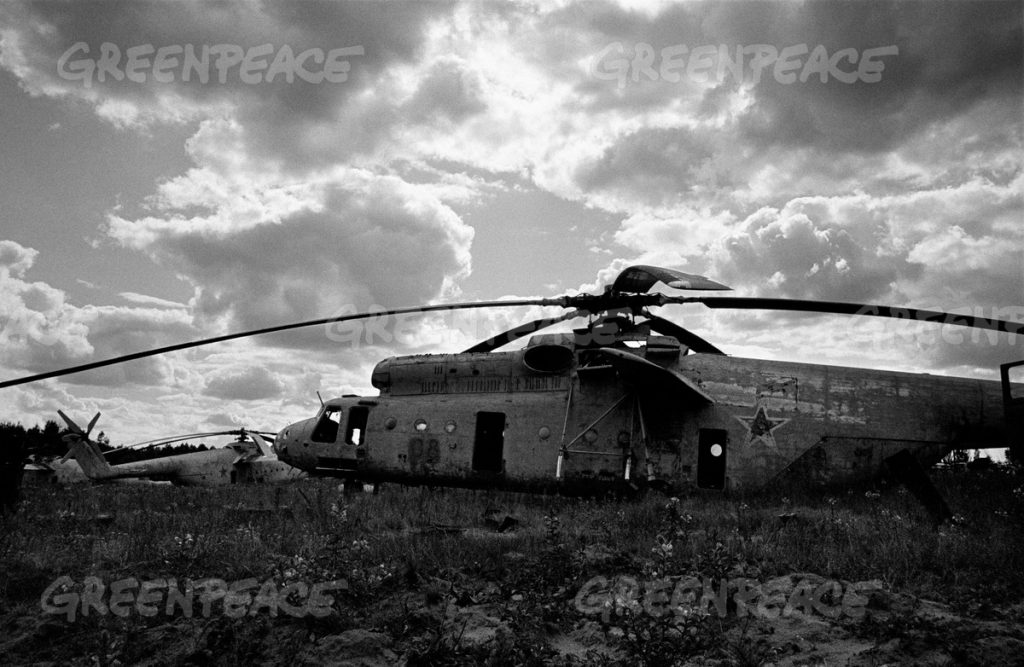 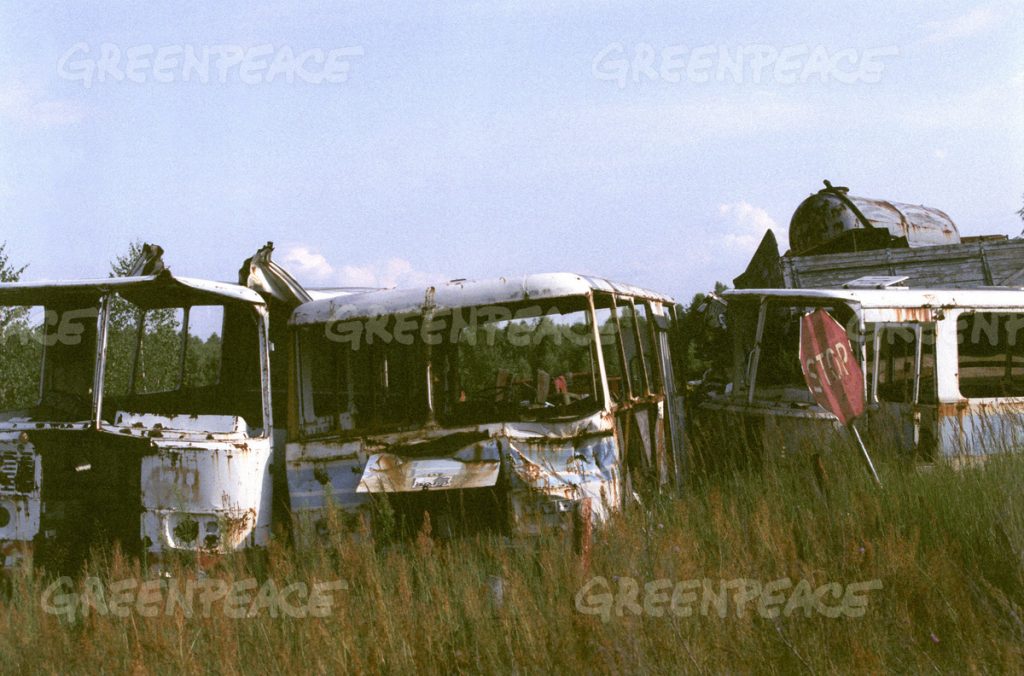 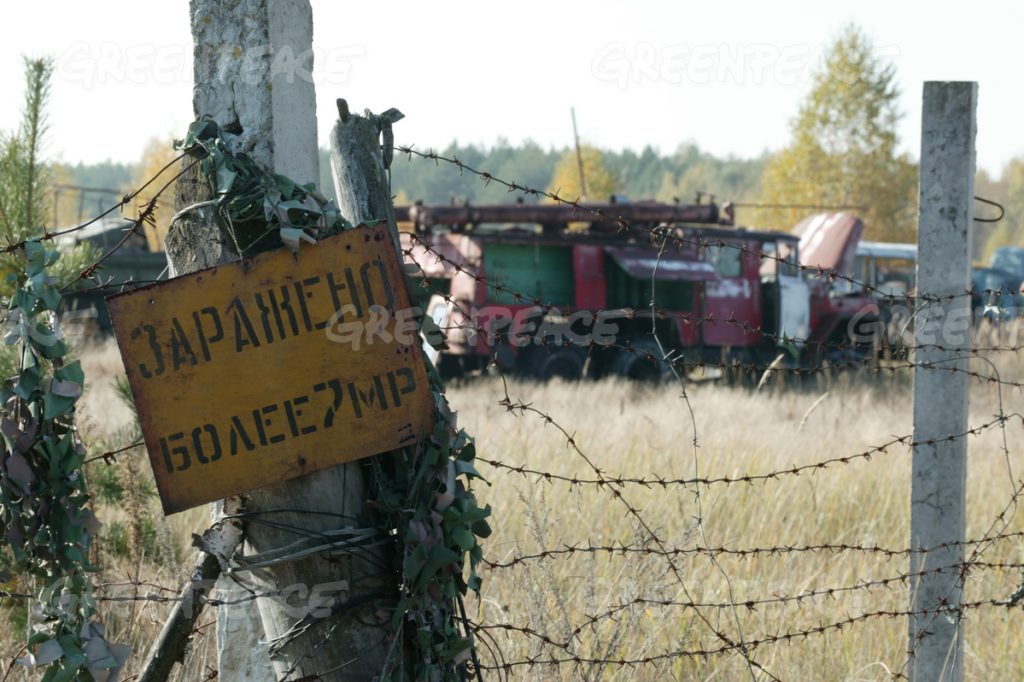 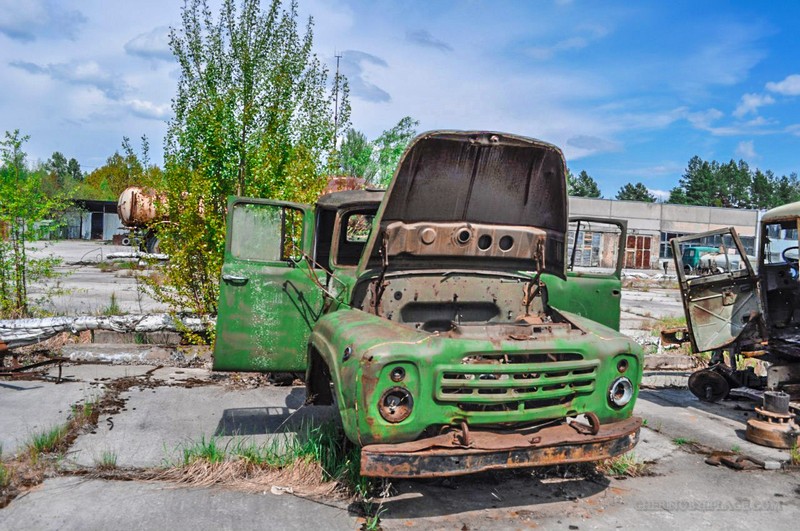 Chernobyl Vehicle Graveyard – what was done with it after exploitation?

Employees to neutralize the place where there was a Chernobyl Vehicle, it was decided to bury in the ground those cars that were very heavily infected and not subject to recovery. So the burial ground of Chernobyl Vehicle appeared. But the problem is that not all the machinery of Chernobyl has become a literal cemetery of cars in Chernobyl.

A lot of cars remained standing in the same place when they were left after the Chernobyl catastrophe. 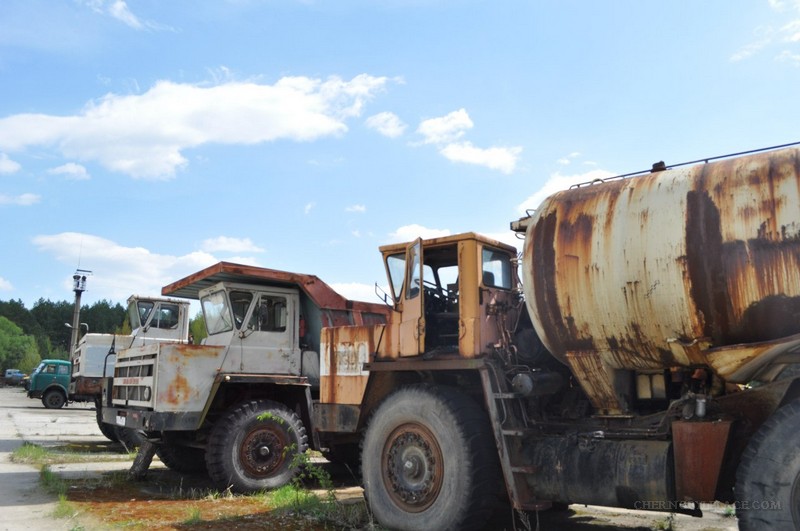 Chernobyl Vehicle Graveyard are dangerous! Far worse is the buried technology, which is not in the ground, but on its surface. Such machines are very attracting the attention of different people who are chasing after easy profit. Lately, rumors began to circulate that the technology had disappeared from Chernobyl.

The question of where the technique from Chernobyl disappeared, caused great concern among scientists around the world. 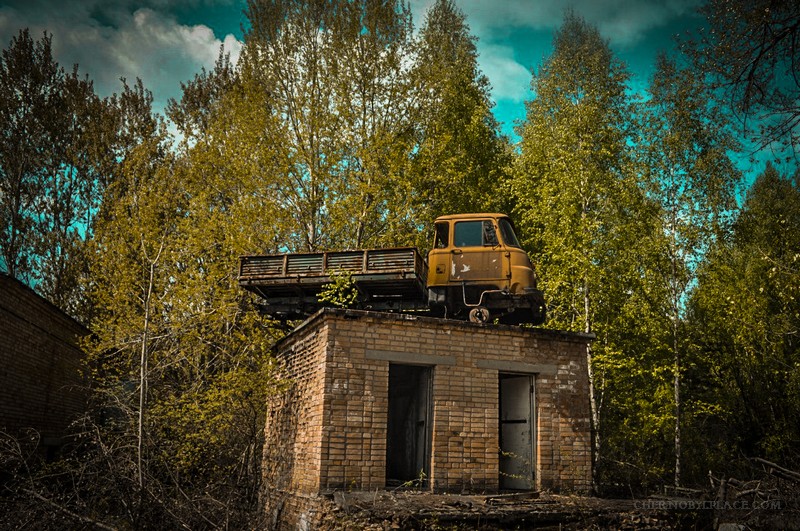 When will it be possible to use Chernobyl Vehicle?

The territory of more than twenty hectares was occupied by abandoned equipment in Chernobyl. Very many attracted these Chernobyl Vehicle. There were rumors that the Chernobyl cemetery of vehicles in the total cost is equivalent to the number of 46 million dollars. These data were given the status for the year when the accident occurred.

Those who were not afraid of catching radiation, and came to look at the cemetery of radioactive technology in Chernobyl, often wondered when it would be possible to redeem all the machines and sell them at a higher price. Many serious people took the opportunity to see the cemetery of equipment in Chernobyl from a satellite.

All very much wanted to quickly acquire such a valuable treasure as the Chernobyl abandoned vehicles. But despite the announcement by the government that the Chernobyl dump is a place that will forever be buried, Chernobyl had its own plans for abandoned equipment: because of the colossal level of radiation, Chernobyl cars will never be used. They will rot, decay for tens of thousands of years before they leave completely. 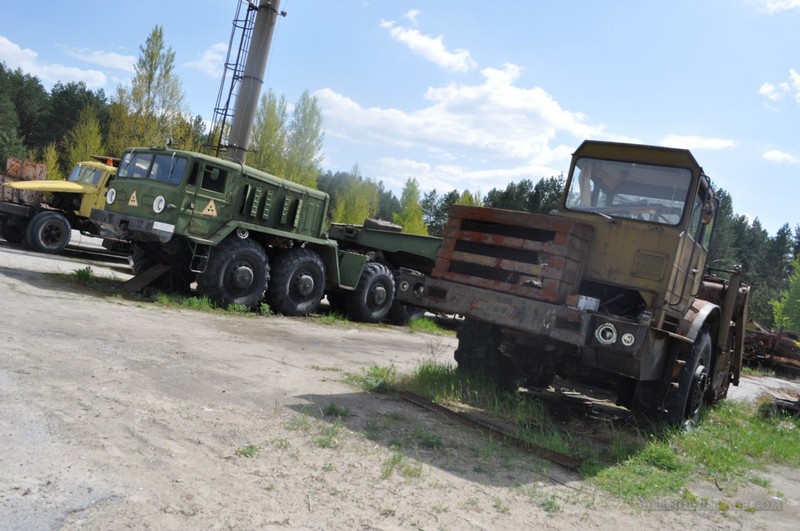