Emergency doctor of Pripyat Valentin Belokon on the terrible night of the Chernobyl accident. Terrible memories.

“On April twenty-fifth at twelve I took to the watch. On Pripyat there is one brigade of “First Aid” – a doctor and a paramedic. And we have only six cars.
When there were many calls, we shared: the paramedic drove to the “chronicles” – if you need to take an injection, and the doctor – for complex cases and children. We worked on duty separately, as if by two brigades: medical assistant Sasha Skachok and me. The dispatcher was Masnetsova. And then from these eight o’clock in the evening somehow everything went off, it raced with surprising speed. No, at first everything was quiet at the nuclear power plant, but it’s troubled around the city. I drove all the time, almost did not get out of the car. 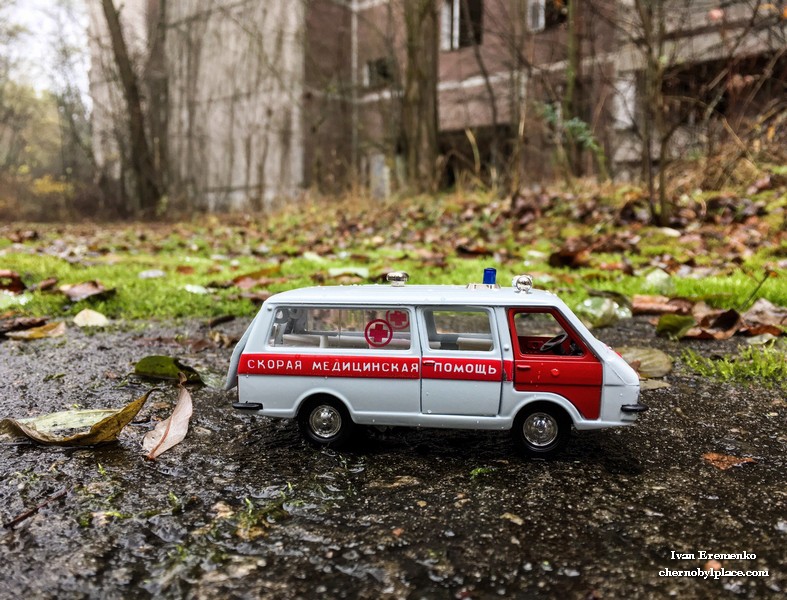 At first there was a booze, someone jumped out of the window, no, he did not die, absolutely healthy, but drunk in the smoke … Then there were children’s challenges, they went alone to granny, and then somewhere in the evening, well remembered, because the night was chaotic, – came the challenge: a boy of thirteen years with bronchial asthma, a prolonged attack. And he dragged on because the neighbor called and did not indicate the apartment numbers. I went to the Builder Avenue, and it’s midnight and the Domina is big. Looked, resembled-no one. What to do? You will not wake everyone up. He left.

Emergency doctor of the Pripyat ambulance, Belokon, saw an explosion at the Chernobyl nuclear power plant: Arrived, Masnetsova said: “They called, they already indicated the apartment number.” I again go there, I come – my neighbor scolds me that I’ve come late. I say: “So and so, I did not know the numbers.” And he: “And you must know.” And I honestly did not know, I went to this boy for the first time. At home this neighbor pressed me, almost a vine into a fight, I then sent the boy to the “RAF” salon and injected intravenously with euphyllin. A neighbor all threatened to complain about me …

That’s when we returned to our hospital – and we went with the driver Anatoly Gumarov, he is an Ossetian, he is about thirty years old – we saw the TO. How it was? At night we go, the city is empty, it’s asleep, I’m next to the driver. I see two flashes from the side of Pripyat, at first we did not understand that it was with the atomic one. We drove along Kurchatov, when we saw flashes. They thought it was the lightning. Because steeply at home, we did not see the nuclear power plant. Only flashes. Like lightning, maybe a little more than lightning. We did not hear the rumbling. The motor worked. Then on the block they told us that it was a great joke. And our dispatcher heard an explosion. One, and then the second right away. Tolya still said: “Lanterns are not lightning, I do not understand.” He himself is a hunter, so he was a little embarrassed. The night was quiet, starry, nothing … 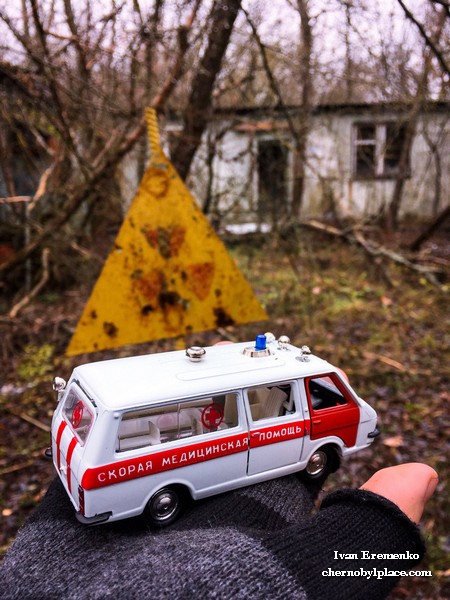 When they arrived in the medical unit, the dispatcher said that there was a call. We arrived at one thirty-five minutes. Received a call to the nuclear, and paramedic Sasha Skachok left for the nuclear power plant. I asked the dispatcher: “Who called, what kind of fire?” She really did not say anything – I need to go, do not. Well, they decided to wait for information from Sasha. At forty to forty forty, Sasha called back, said that the fire, there are burned, a doctor is needed. He was excited, no details, and hung up. I took the bag, took the drugs, because there are burned, told the dispatcher to contact the head of the medical unit. He took with him two more empty cars, and he himself went with Gumarov.
Prior to the atomic course, the “rafik” – about seven minutes to ten minutes in a straight line.
We left the road that goes to Kiev, and then turned left into the station. That’s where I met Sasha Skachka – he was going to meet us in the medical unit, but his “rafik” was with the beacon on, and I did not stop them, because once with the lighthouse – the case is not ordinary. We went further to the station. 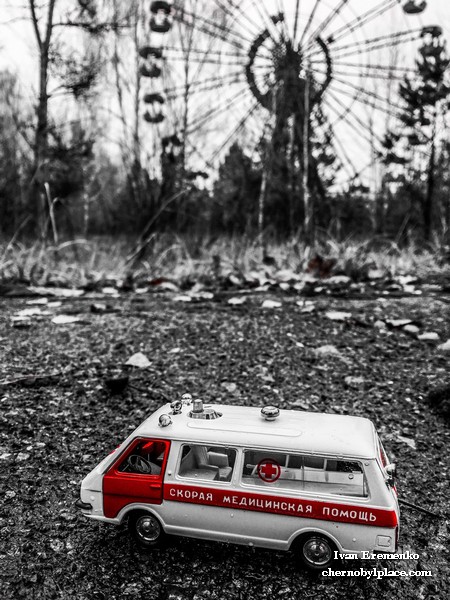 “We talked with Kibenok right at the power unit”

The gate is guarded, the ensign meets us: “Where are you going?” – “To the fire.” – “And why without overalls?” – “How did I know that my overalls would be needed?” I’m without information. In one dressing gown was, April evening, warm at night, even without a cap, without anything. We stopped by, I met Kibenok.
When he talked to Kibenok, he asked him: “Are there any burned?” He says: “There are no burned. But the situation is not entirely clear. Something my lads a little nauseated. ”
The fire was virtually no longer visible, he somehow crawled along the pipe. Overlapping collapsed, roofing …
We talked with Kibenok right at the power unit, where the firemen stood. Pravik, Kibenok – they then drove up by two cars. The ruler jumped out, but did not approach me, but the Kibenok was a little nervous, agitated. 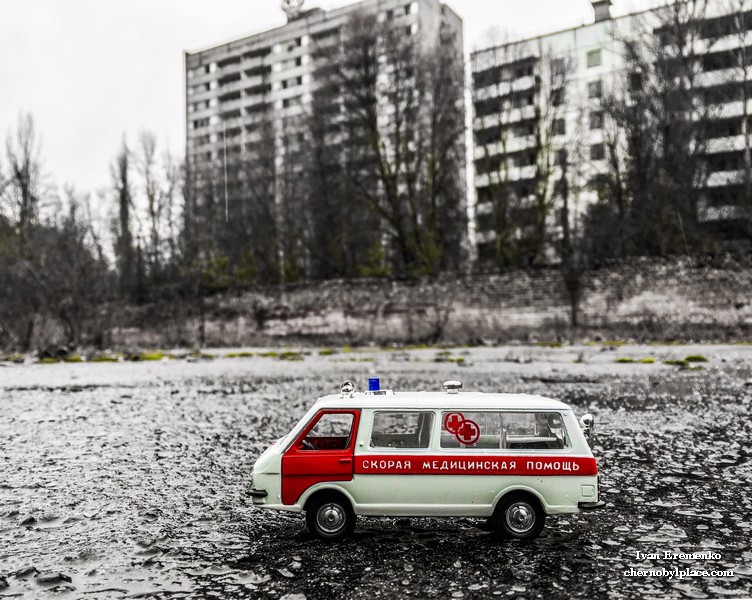 I told Pecheritsa that I had seen a fire, I saw a collapsed roof on the fourth power unit. It was something like two o’clock in the morning. He said that I’m worried – I came here, I do not do any work yet, but the city hangs all over me. There may be urgent calls. I also told Pecheritsa that there are no casualties yet, but firefighters say that they are feeling nauseous. He began to remember military hygiene, to recall the institute. Some knowledge surfaced, although it seemed as though he had forgotten everything. In fact as at us considered? Who needs it – radiation hygiene? Hiroshima, Nagasaki – all this is so far away from us.
Pecheritsa said: “Stay still while in the place, in fifteen or twenty minutes you’ll call back, we’ll tell you what to do. Do not worry, we will give our doctor to the city, we will call. ” And literally there and then came to me three, in my opinion, sent, led a guy of eighteen. The guy complained of nausea, severe headaches, vomiting began. They worked on the third block and, it seems, went to the fourth … I ask – what did I eat, when, how did I spend the evening, how much can I get sick of? He measured the pressure, there was a hundred and forty or one hundred and fifty to ninety, a little high, jumped, and the guy was a little out of himself, some kind of … He took him to the ambulance. In the lobby there is nothing, there’s nothing to plant there, only two machines with sparkling water, and the health center is closed. And he “swims” in front of my eyes, although excited, and at the same time such symptoms – a confused psyche, can not speak, began to somehow stumble, like he took a good dose of alcohol, but no smell, nothing … Pale. And those that ran out of the block, only exclaimed: “Horror, horror.” They had already lost their psyche. Then the guys said that the instruments are off scale. But it was later.