What does the Chernobyl exclusion zone look like in the spring?

After winter’s departure in the exclusion zone, it’s quite wet for a long time, the fields are flooded with water after the recently melted snow. The birds sing, flowers bloom, trees appear on the trees, a pleasant, spring breeze blows. Noisy leaves, driven by the warm, silent breath of the spring wind. We are going for a walk in the exclusion zone, because in the spring we want to go to these radioactive lands more than ever. We begin our tour of the Chernobyl zone.

We go to the village of Kopachi, it was once a cozy Polissya village, located only 4 km. from the nuclear power plant. The village was almost completely buried in the ground by the order of the administration of the zone, some buildings still survived to this day. We went to the territory of the machine-tractor station. Сhernobyl exclusion zone photos

Large hangars in which once the repair of agricultural machinery. 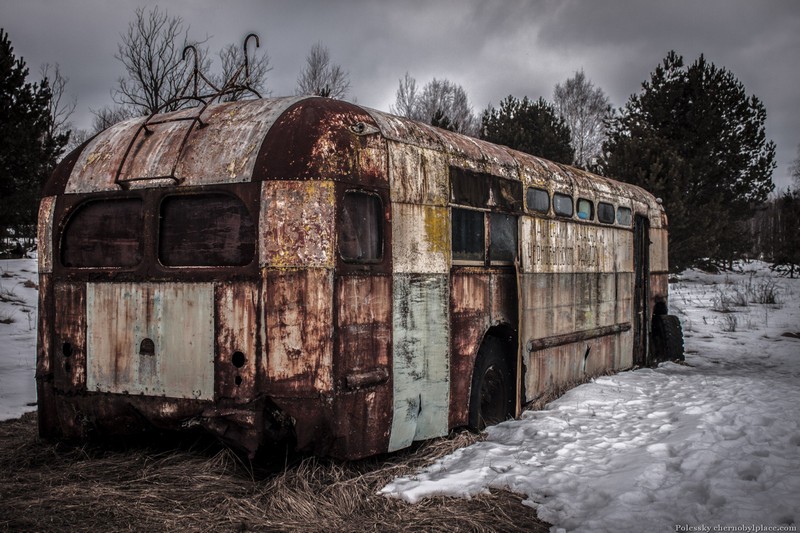 A walk through the Chernobyl zone is a real pleasure for us.

In one place, the dosimeter-radiometer showed a significant excess. It was a radioactive stain. Take food, smoke, and also relax next to such a place is quite dangerous.

Passing along the old road from the village of Kopachi to Pripyat, we photograph the Chernobyl nuclear power plant 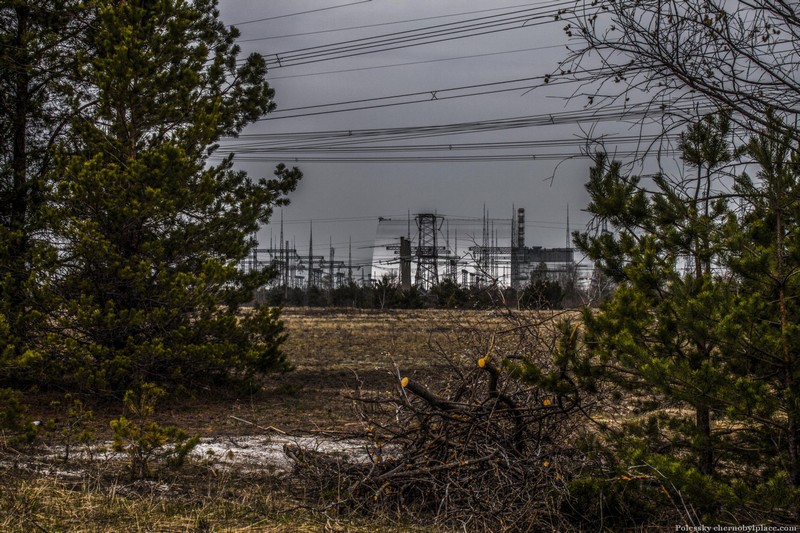 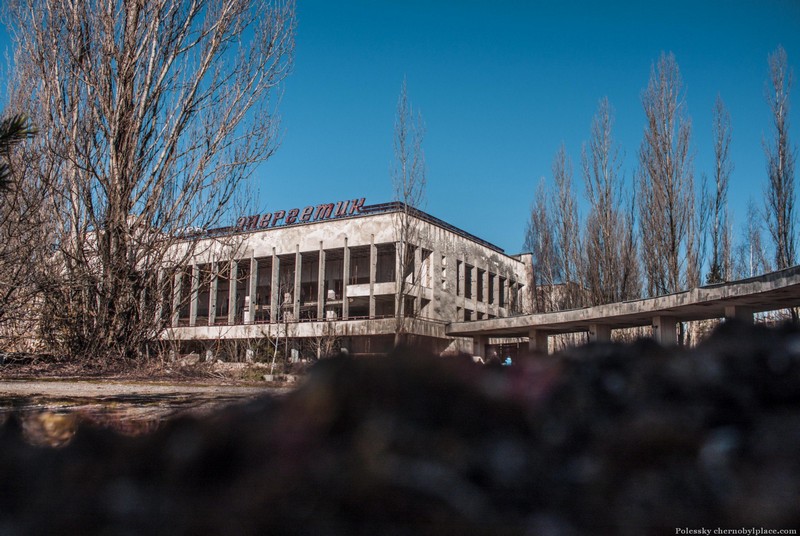 View from House of Culture Energetik 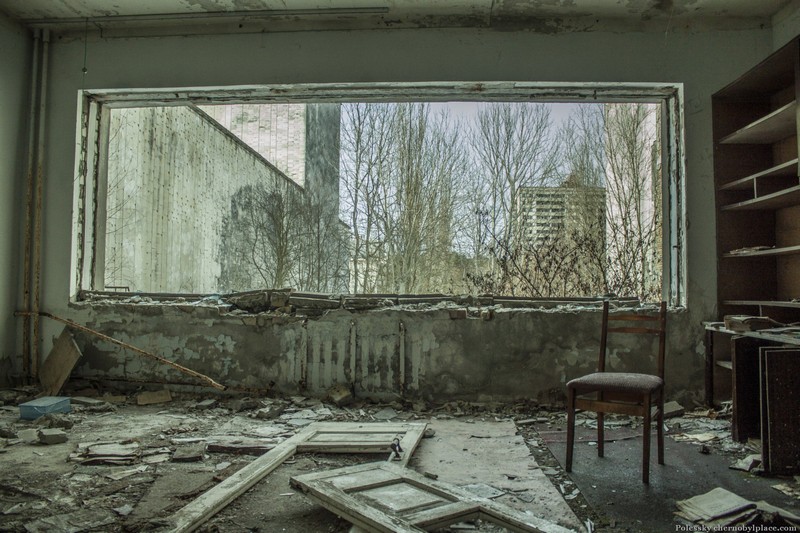 We go to school number 2, this is the most preserved of 5 schools in the city of Pripyat. In addition, tourists are not often driven here. Atmosphere place.

Naturally, this mask was brought here by photographers for delicious post-apocalypse shots

Schools of the dead city of Pripyat are really atmospheric places in comparison, let’s say with apartments, which today are already under the pure loot. School looters found the marauders not necessary for their black affairs. Schools still have books, school magazines, notebooks, colors and other school supplies in schools. All these subjects leave a deep impression on the examination. A special spirit of the Soviet time is felt.

Children’s drawings and crafts from plasticine 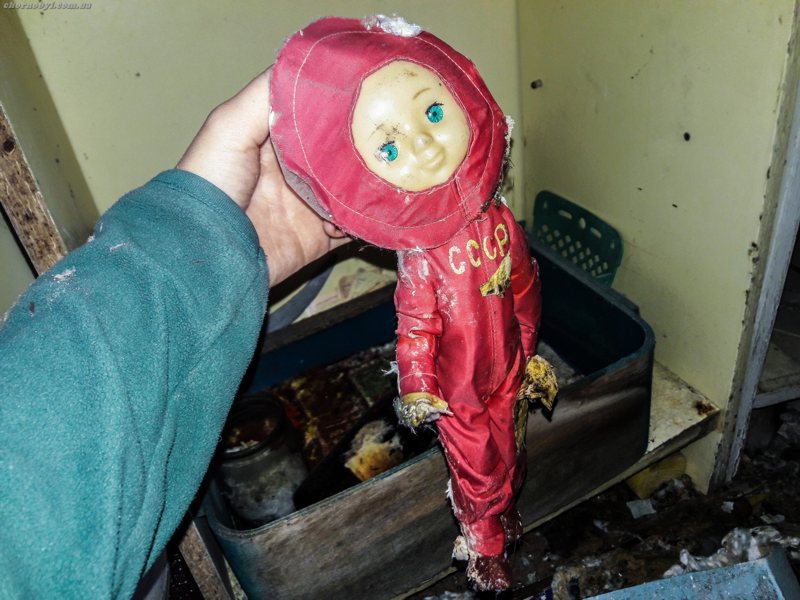 In the spring, before gardening all around, walking around the ghost town is still quite cozy, later – in the summer you will have to make your way through the urban jungle.

Flowing corridors of the kindergarten

Numerous toys that are not of interest to marauders remained here 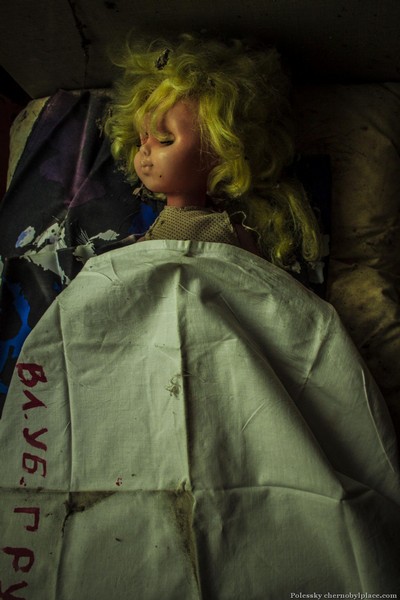 And this Pripyat fox “Semyon”, who likes to eat sandwiches from official tourists.

Interesting interior of the apartment in Pripyat.

The surviving sofa in the apartment

On the roofs grow bushes and trees

Chernobyl exclusion zone in 2018, from the outside of the house does not change the look of the year from year to year, but inside it there is complete destruction due to the leakage of the roofs of buildings. 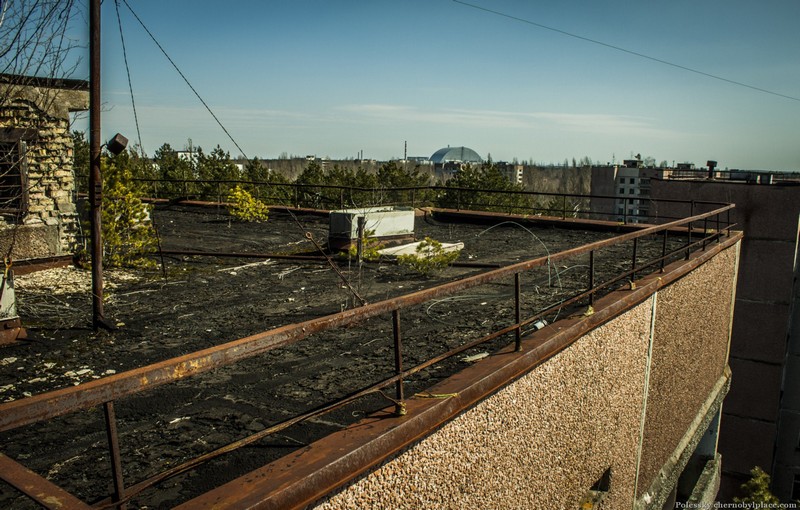 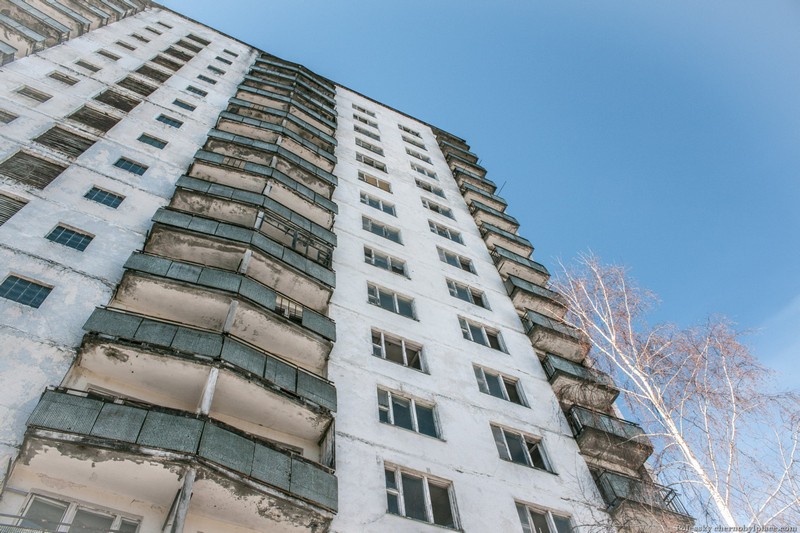 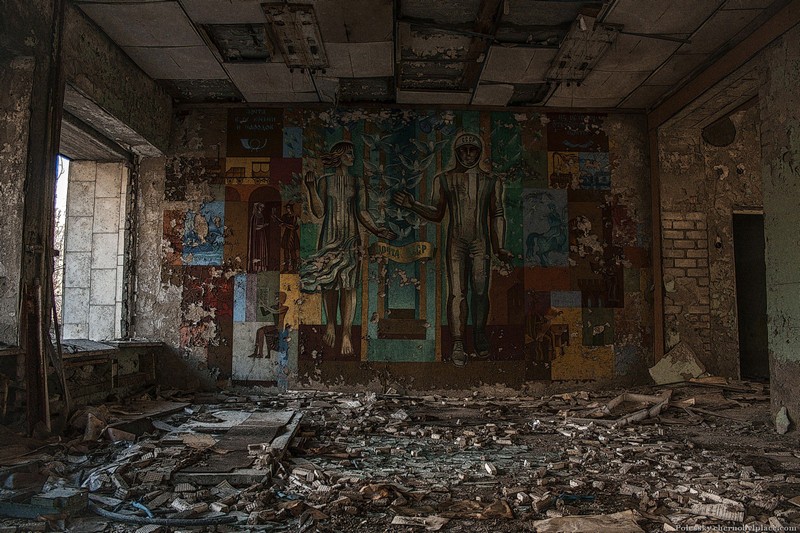 Idol of a bygone era

The abandoned radioactive equipment of the liquidators of the Chernobyl accident

And this is an engineering car of the defenses, it served to clear the rubble near the destroyed reactor, as well as to destroy houses in some villages.

The third stage of the Chernobyl NPP, the unfinished 5 th and 6 th power units

The interior of the unfinished blocks has been dismantled for several years by metal hunters, and there is a lot of metal here. 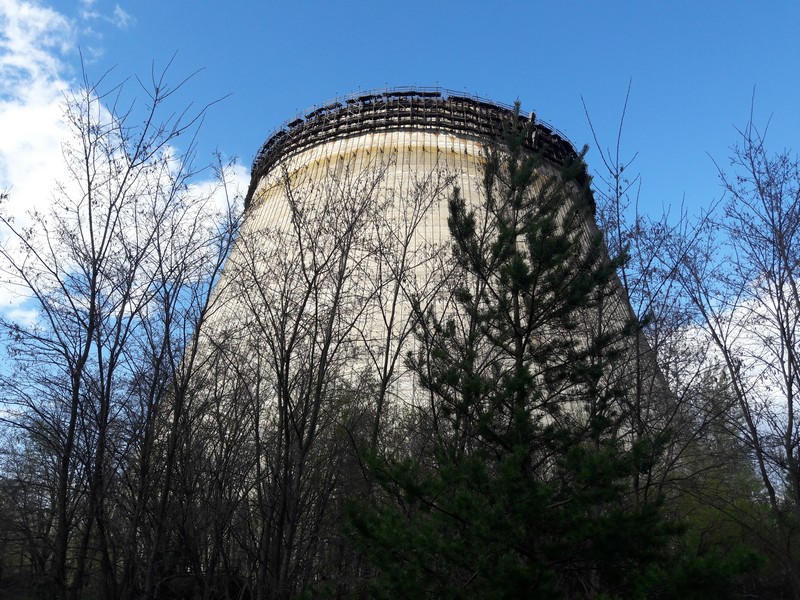 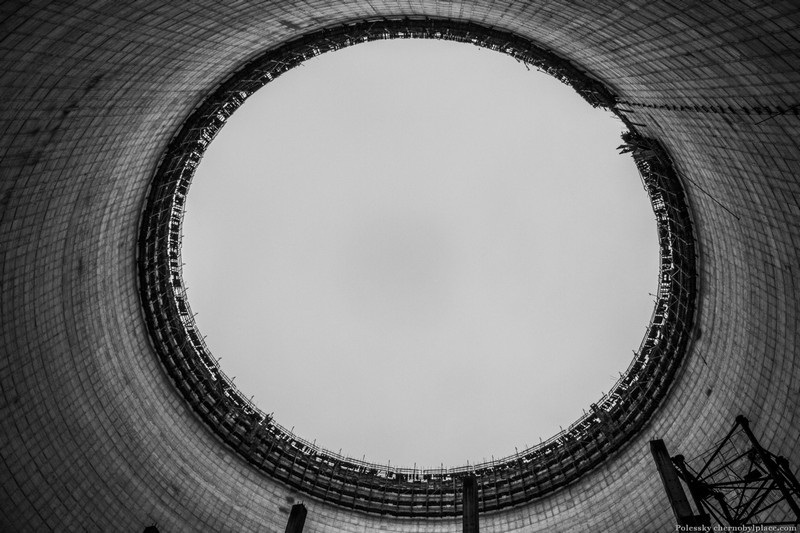 Inside the tower amazing acoustics, Ivan Eremenko played the guitar

Recently, an artist painted graffiti in a cooling tower

Cemetery of refrigerators from the city of Pripyat

The sunset in the city of Chernobyl is gorgeous .. 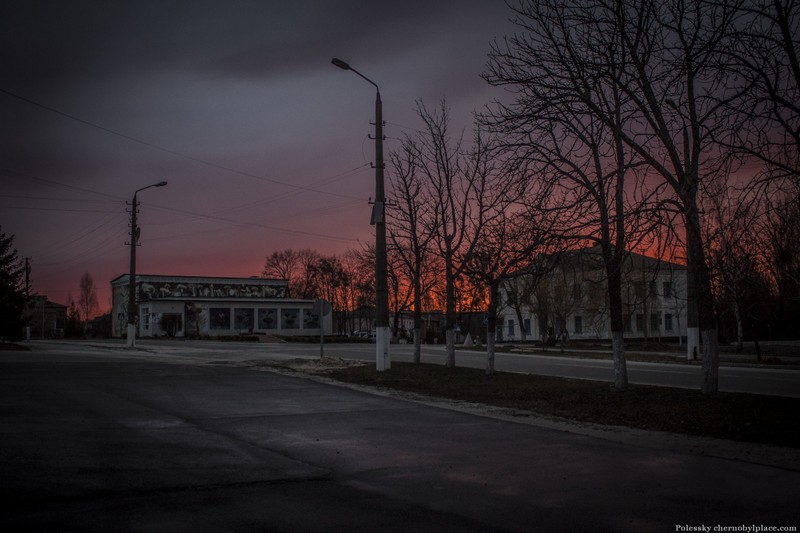 On the roof of house in Pripyat at night – very atmospheric! 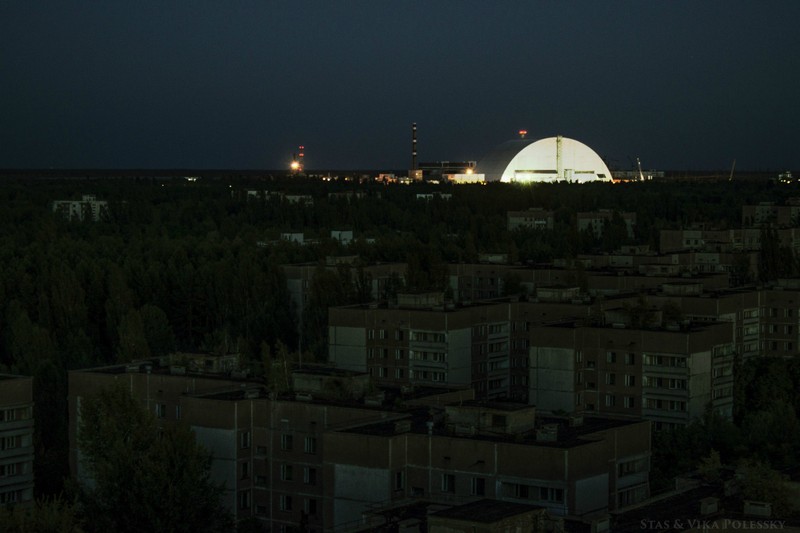 We conduct excursions to the Chernobyl zone, to the Pripyat city, to the cemetery of vehicles “Buryakovka”, walking through the ghost town of Pripyat at night, and more interesting places, officially.

To book a tour please give us a call: