The Chernobyl exclusion zone is filled with wild animals. Here there are a variety of species that perfectly feel in a radioactive environment. Animals in Chernobyl are very interesting.

After the accident at Chernobyl, animals in zone not only did not disappear, but on the contrary increased in their population.

This is due to the fact that hunting in the exclusion zone after the Chernobyl accident was banned. Animals  live in a radioactive environment, feed on “dirty” food. Therefore, they themselves represent a radiation hazard for a person.

Photo: wolves in the Chernobyl zone attack a deer:

A very interesting species of animals in Chernobyl is the Przewalski horse.

The introduction of Przhevalsky’s horses into the Chernobyl exclusion zone was carried out in accordance with the “Program for the Creation of a Free Population”, which was developed by the specialists of the Askania-Nova Reserve. Provision was made for the maintenance of animals in the conditions of enclosures in the Acclimatization Center established on the territory of the exclusion zone.

In May 1998, 22 horses from Przhevalsky were brought from the Askania-Nova reserve.

Now the horses are still living in Chernobyl.
Release of animals to freedom was carried out in 1999: 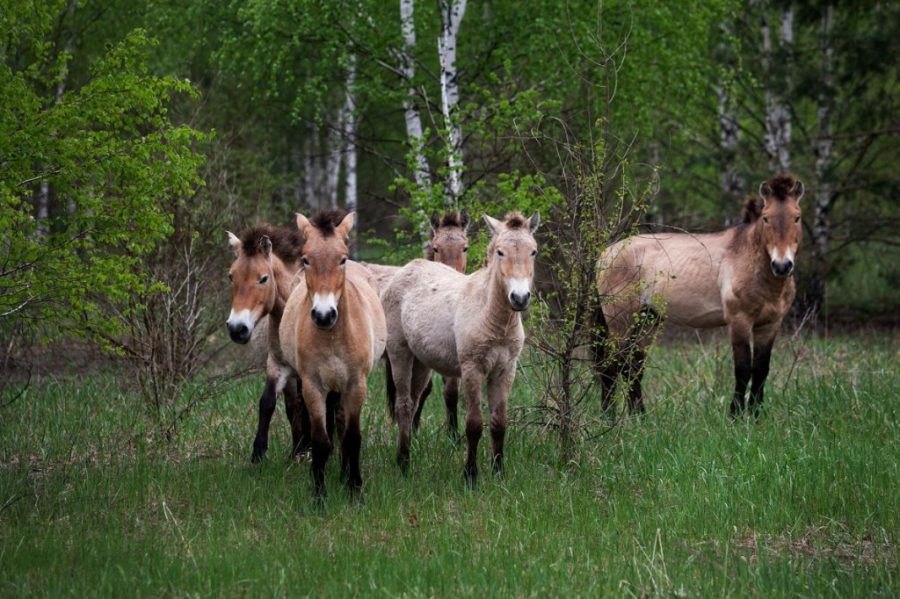 Bears are very rare. They mostly live in the Belorussian exclusion zone. Although there were cases of penetration of a bear into the territory of the Ukrainian zone: 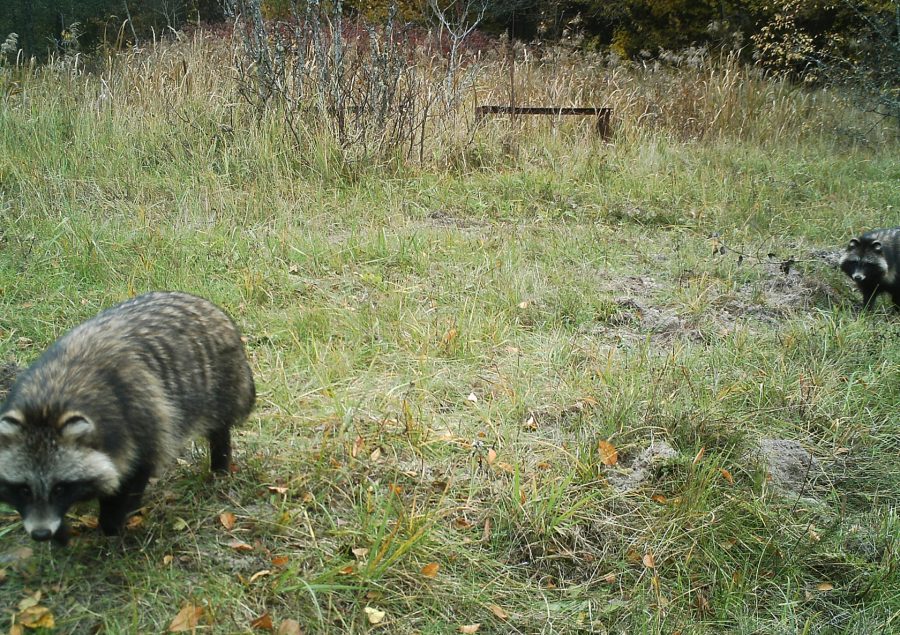 Wolves are dangerous animals in Chernobyl

Wolves live throughout the territory of the ChZO. Animals do not contact people, but scientists often find their footprints and hear howling in the dense forests of Chernobyl:

As a result of the installation of such photo traps, scientists managed to remove a lot of animals.

The population of wild boars in the area in the last few years has significantly decreased. These animals had one of the largest populations until 2013. Due to the invasion of the disease, the number of wild boars decreased several times.

A popular animal in Chernobyl

The most popular beast is a fox. One of them lives in Pripyat. And tourists call him Semyon. He is not afraid of people, always runs out to the crowd and waits for treats. Semyon loves cutlets and sausages: 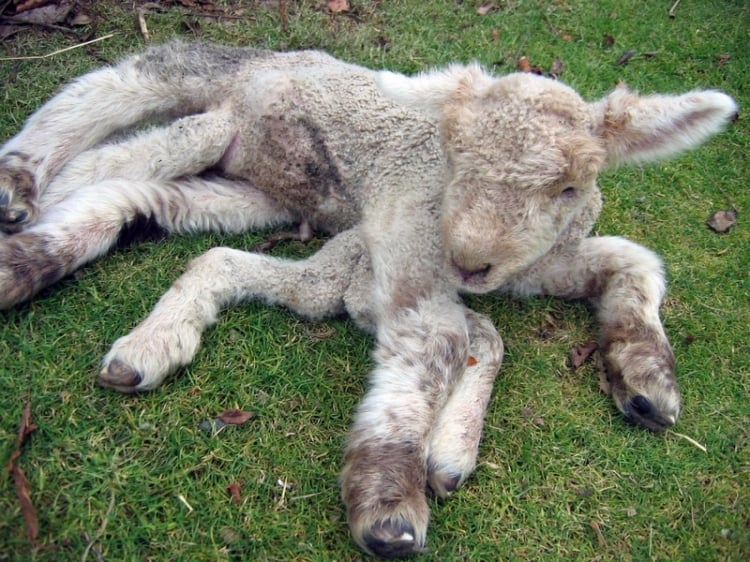 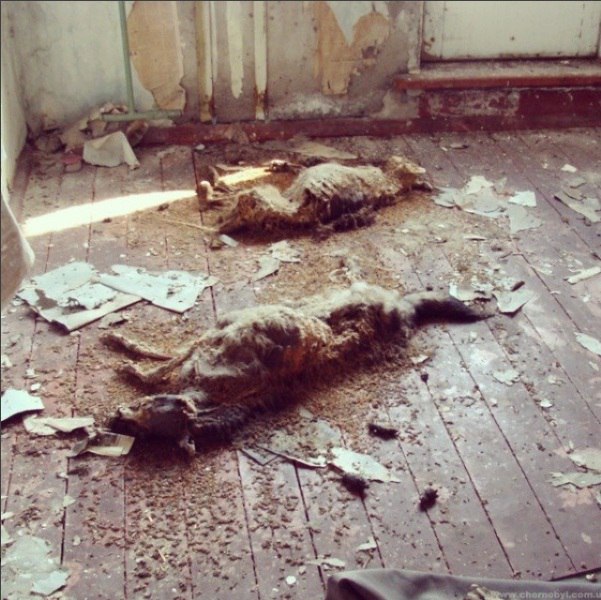 Shooting of abandoned animals in Chernobyl

Memoirs of the liquidator. Yevgeny Samoylov:

“I was surprised to see how animals organize themselves without humans. A familiar mongrel was sitting in front of us, behind her a wide half-circle was surrounded by our BRDM dogs of the largest breeds – noble marble danes, shaggy St. Bernards, German shepherds … Very exactly, observing a distance of about seven meters from the first semicircle, they sat and watched blinking terriers, spaniels. The third circle formed small dachshunds, lap-dogs … In the distance, near the houses on the opposite side of the square in the bushes flashed cats. The dogs did not react to them in any way, showing by their very appearance that they were faithful bred servants of their short-lived masters and only a cruel famine makes them beg for pieces … ”
And tomorrow, through the respirator, I heard the smell of gunpowder. Throughout the road there were people of mouse-colored robes with double-barrels. They walked the streets, went into the courtyards. Shots fired in Cherevac, Zalesie, Lelyovo, Kopachi, Pripyat.
No one else came out to the porch. In this city, no one but birds will return to live. The city died …

The Dead Dog in Pripyat

“Do not offend the Beetle, she is kind” – how to shoot defenseless animals in Chernobyl

“… The whole way back along the road Chernobyl – Kiev kilometers of curbs in the corpses of dogs that people loaded into the garbage trucks in the mouse … Near the turn on the primer leading from the Cops to the station in deep dust, the dog swims, bending all over with unbearable itching or pain, rises , shakes himself off. I see – half the body is completely without wool, smooth, white with blue skin … The inscription on the chalk fence: “Do not offend the Beetle, she’s kind, she does not bite at all,” the wicket is open … ” 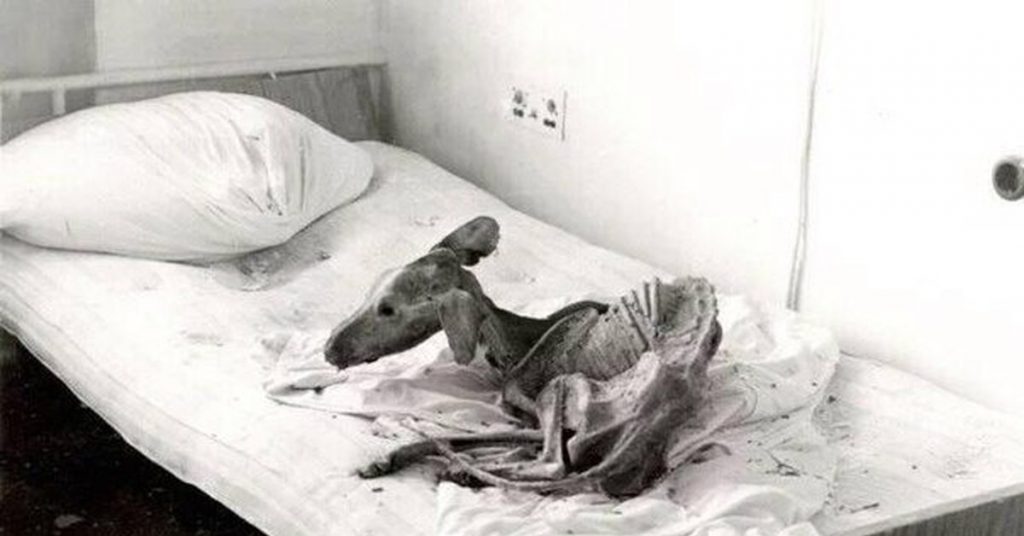 The Dead Dog in Pripyat

At the moment, you can sometimes find a mummy of an animal in Pripyat. In the Chernobyl zone a large number of dogs and cats. They are no longer fired, they are simply sterilized.

See the photo on our website, as Chernobyl now lives