Shortly after the explosion at the Chernobyl nuclear power plant on April 26, 1986, few were ready to carry a huge amount of radiation and document the catastrophe, but the Russian photographer Igor Kostin was an exception.

In subsequent years, he continued to follow the political and personal histories of those who suffered from a natural disaster, published the book “Chernobyl: A Confession of a Reporter”.

The first photo of the reactor was made at 4 pm from the helicopter, 14 hours after the explosion. Later, radiation experts learned that at an altitude of 200 meters above the reactor, the radiation level reached 1500 rem. 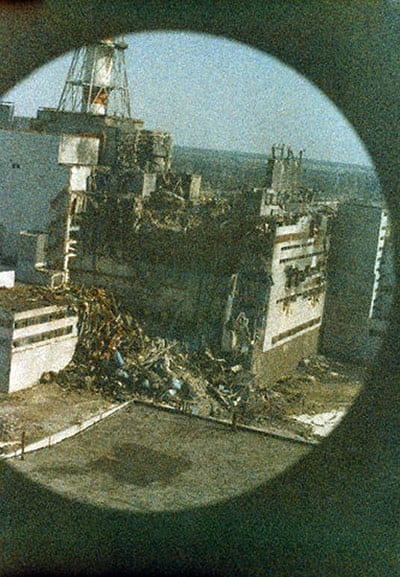 The helicopter disinfects the place of disaster. After the explosion, the nuclear power plant was covered with radioactive dust. Aircraft and helicopters flew over the site, spraying a sticky liquid for decontamination, which fixed the radiation to the ground. Workers, known as “liquidators”, then rolled up the dried remains, like a carpet, and buried nuclear waste 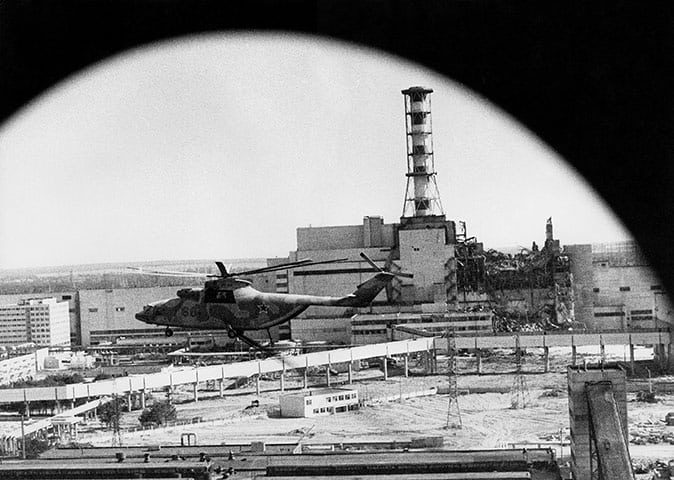 In the 30-kilometer zone of the reactor, the liquidators measure the radiation levels in neighboring fields using obsolete radiation meters, wear anti-microbial combat suits that do not protect against radiation. Young plants will not be collected, but used by scientists to study genetic mutations in them. 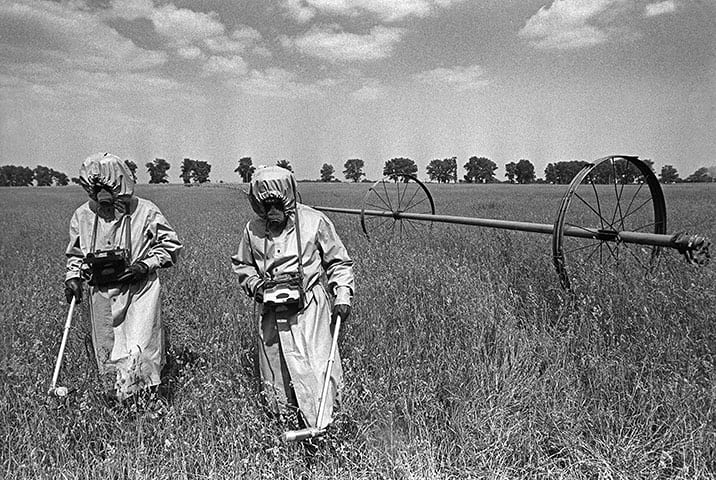 After the evacuation of the inhabitants of Chernobyl on May 5, 1986, the liquidators washed the radioactive dust from the streets. Before the Chernobyl catastrophe about 15 000 inhabitants lived. 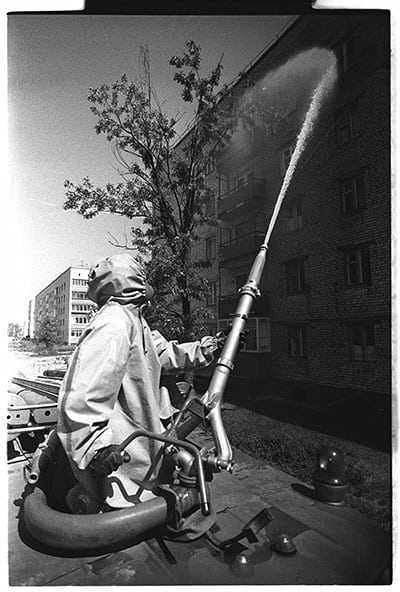 Dead fish are collected from an artificial lake in the territory of Chernobyl, from which water was taken to cool the turbines. The fish that died from the effects of radiation is abnormally large and flabby. 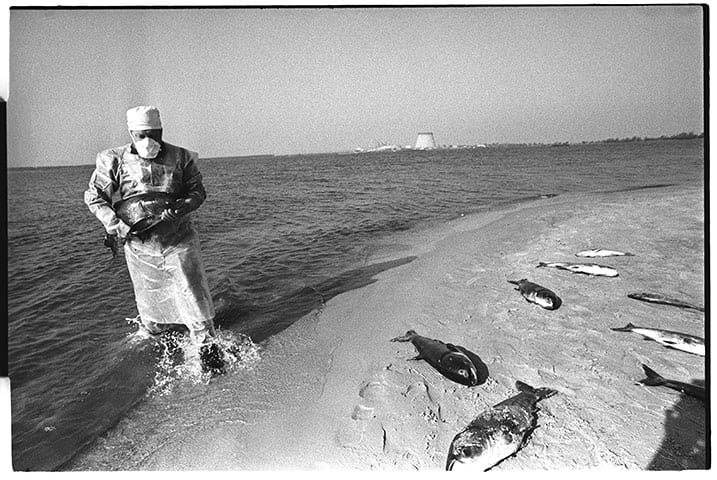 The remains of reactor No. 4, from the roof of the third reactor 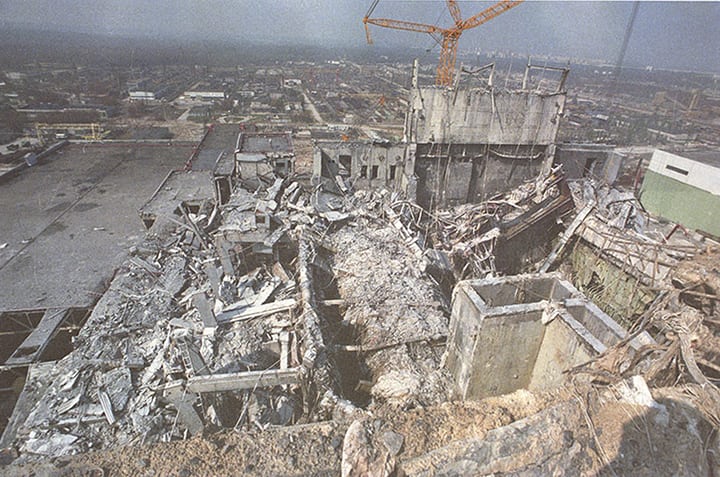 Most of the liquidators in Chernobyl were people called out of military reserves because of their experience in clearing operations or chemical protection units. The army did not have a specialized form for use in radioactive conditions, so those who enrolled had to wear clothes made of lead sheets with a thickness of 2-4 mm. These sheets were cut to size so that aprons would cover their bodies in front and behind, especially for protecting the spine and bone marrow. 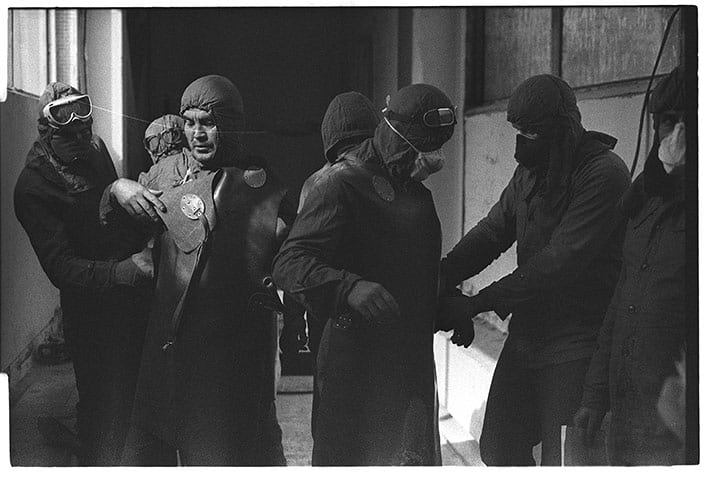 The liquidators clean the roof of the reactor 3. Initially, the workers tried to clean radioactive debris using West German, Japanese and Russian robots, but they could not cope with the extreme levels of radiation, so the authorities decided to use people. Since that time, many liquidators have died or suffer from serious health problems. 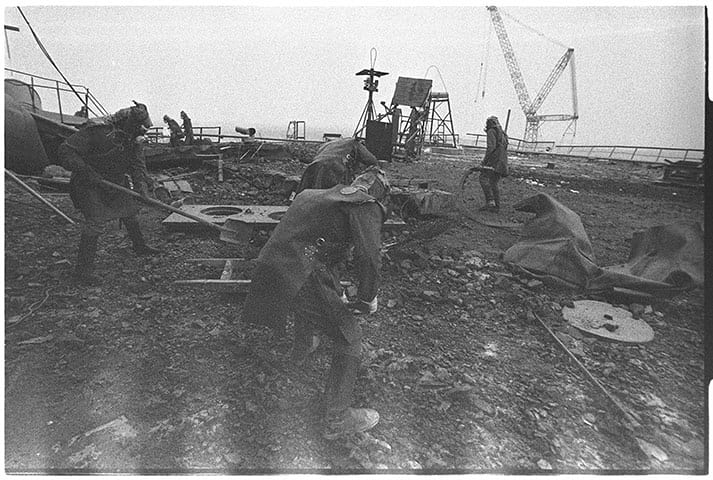 On the occasion of the end of the cleaning operation at Reactor 3, the authorities ordered three men to fix the red flag to the top of the chimney. 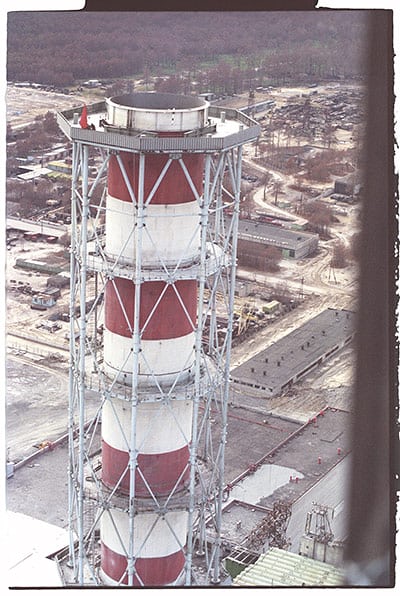 Hans Blix (center), director of the International Atomic Energy Agency, watches a video detailing the operation to clean up the members of the government commission. Blix became the central figure in the liquidation of the consequences of natural disasters, visiting the Chernobyl site several times and observing the construction of the sarcophagus. 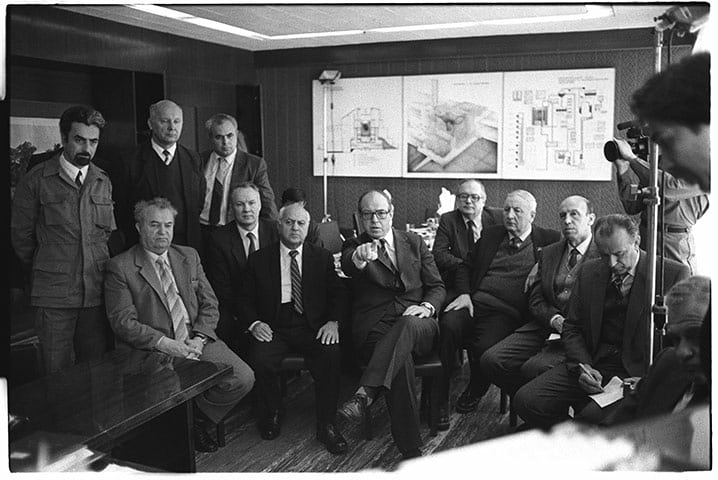 In a specialized radiation unit in Moscow, the liquidator is examined by a doctor after the operation in a sterile air-conditioned room. 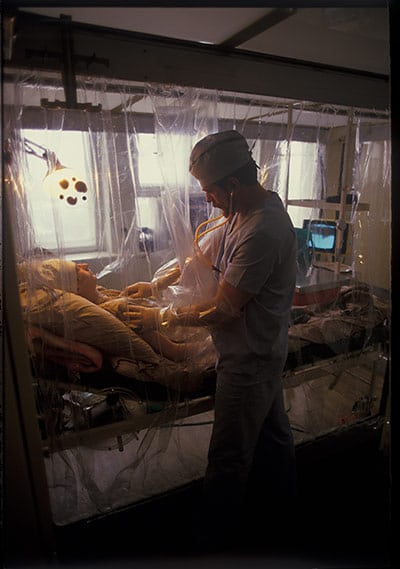 The village of Kopachi is buried, the house is behind the house. It was located 7 km from the Chernobyl reactor. Entire villages will be buried in this way. 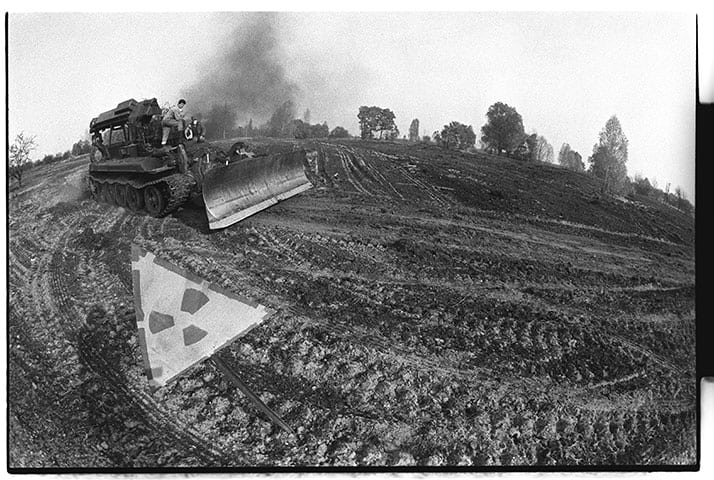 Geneticists and botanical experts noted that many plants were victims of gigantism within a year of the disaster. These monster plants were soon destroyed by natural selection. 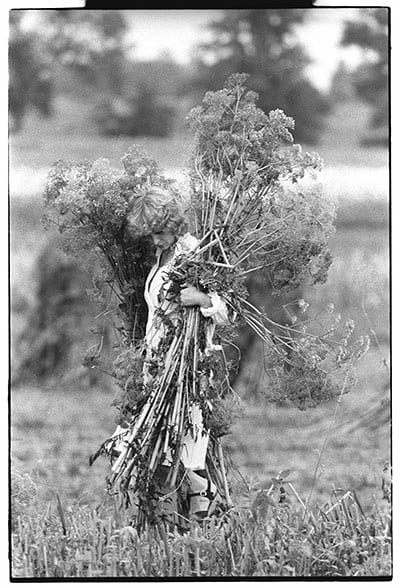 Relatives visit the funeral of the radiation expert Alexander Gureyev, one of the liquidators who cleaned the roof of the reactor 3. These specialists were often called “roof cats”. Gureev died as a result of radiation exposure. 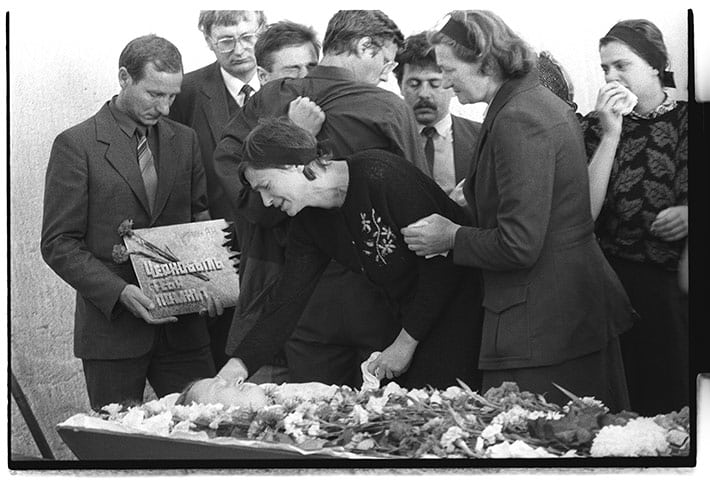 Kostin discovered this deformed child in a special school for abandoned children in Belarus. The photo was published in the local Belarusian press, and a boy named “Chernobyl child”. Then it was printed in the German magazine Stern and became world famous. The child was adopted by a British family, underwent several operations and currently lives a relatively normal life. 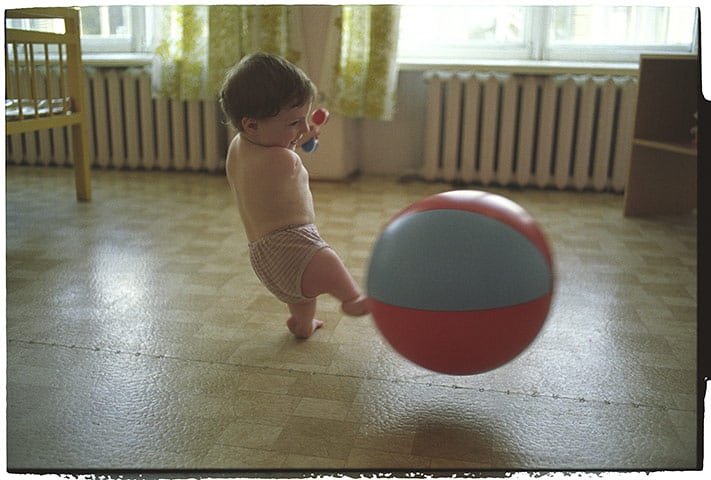 Demonstrators in Kiev demand that the government promulgate secret Chernobyl documents. One banner says: “We demand a court in Nuremberg for Chernobyl.” Many of the affected regions are represented by their national flags, such as the green flag of Belarus, the blue and yellow flag of Ukraine and the tricolor of Russia. 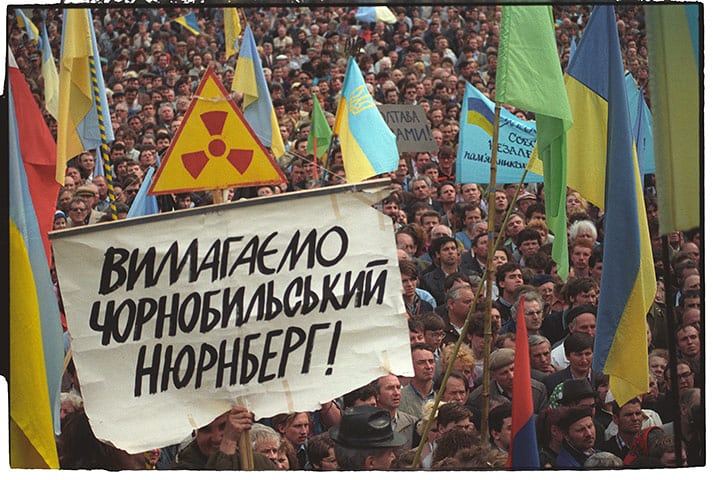 Infected apples hang unassembled on a tree within a 30-kilometer inactivity zone around the nuclear facility, three years after the explosion. 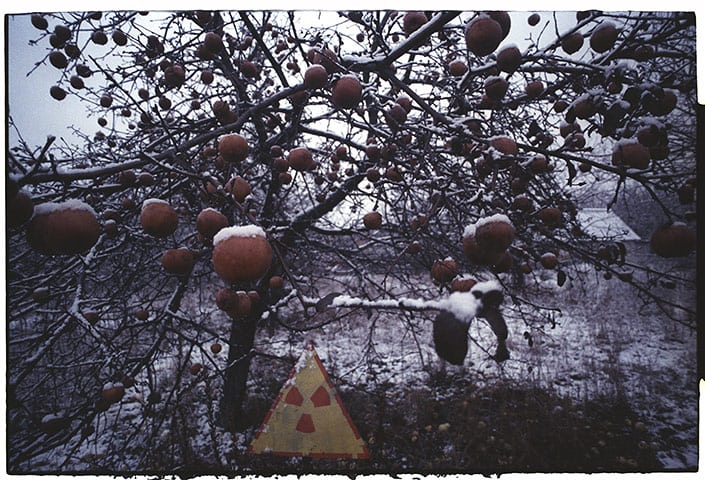 A villager who refuses to leave his home in a closed area, despite the high concentration of radioactive background-137 in the soil. 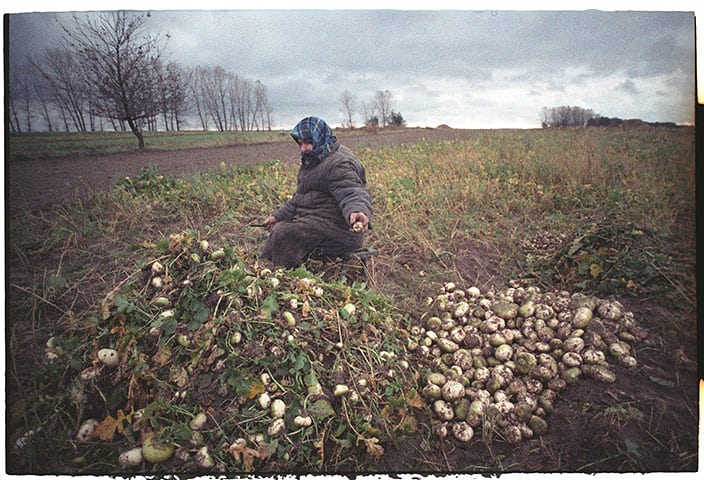 The evacuated city of Pripyat. Before the disaster there were 47 000 inhabitants, including 17 000 children. Because of the contamination with isotopes of plutonium, Pripyat can not be inhabited for another 24,000 years. It was built to house Chernobyl workers in the 1970s and was one of the “youngest” cities in the USSR with an average age of 26 years. Other informal evacuations were also conducted, including in Kiev. 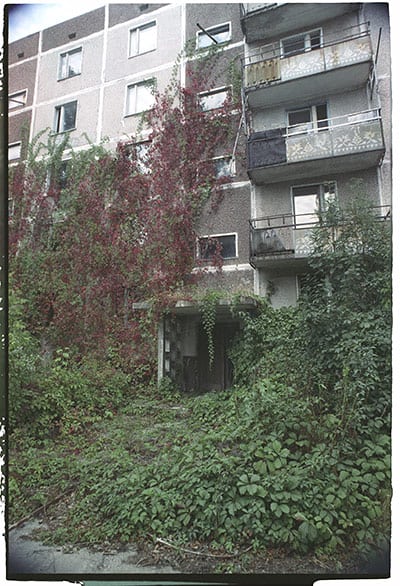 You can see here, reflected in the window of the control post at the entrance to Pripyat. A ghost town containing a very high radiation level of 171 microR / H in five years after the disaster. The radiation level is considered safe to a value of approximately 50 microR / H. 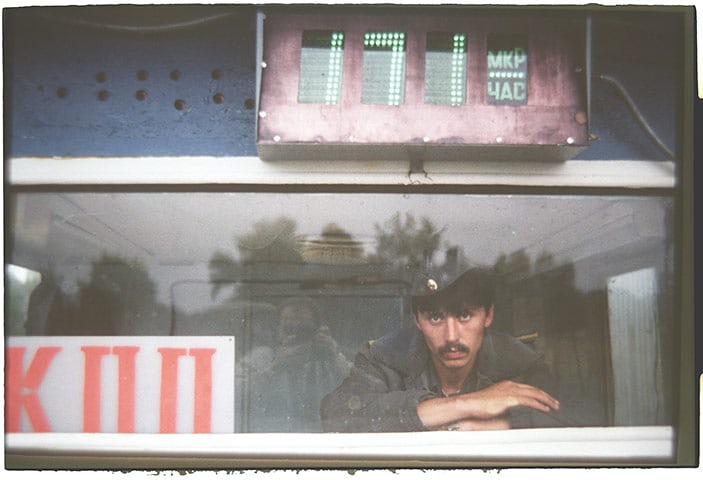